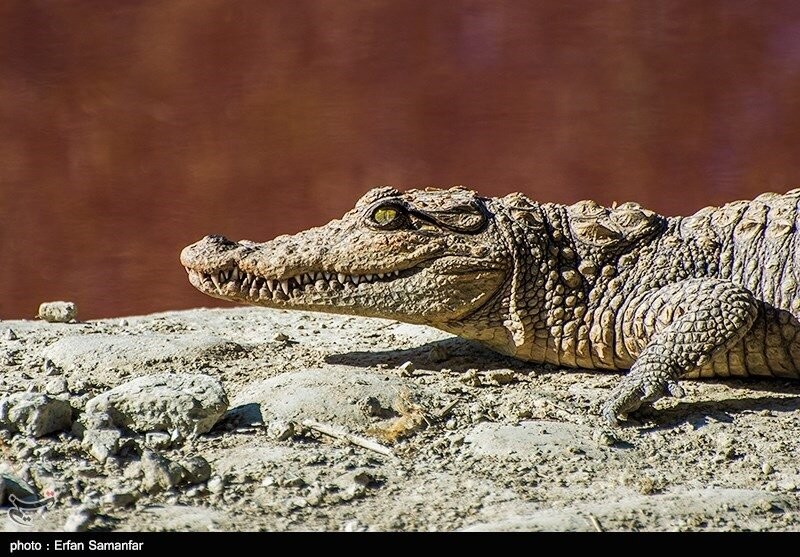 Mugger crocodile breeding is one of the new economic projects in Chabahar port that can bring employment prosperity while preserving the environment in the southeastern region.

The mugger crocodile, also called marsh crocodile, broad-snouted crocodile and mugger, is a crocodilian native to freshwater habitats from southern Iran to the Indian subcontinent. It is extinct in Bhutan and Myanmar and has been listed as Vulnerable on the IUCN Red List since 1982.

In English, the species is called Mugger, which is rooted in Hindi meaning sea monster, but the locals of southern Iran have chosen the name “Gando” for this large reptile, which in Balochi means walking on the belly.

Gando, one of the tourist attractions in the Chabahar Free Zone, is the only crocodile native to Iran and the largest reptile of the country.

It is interesting to know that the species is one of the rarest in the world and has a shorter snout than other similar species, which can be a valuable potential for attracting tourists and preserving wildlife in Iran.

“Wherever Gando is, there is plenty of water” is a common belief in southern regions of Sistan-Baluchestan, as they consider the animal as a symbol of blessing and prosperity and believe that with the migration and death of this animal, drought and famine will overshadow their lives.

By digging canals that are several meters deep and up to 15 meters long, Gando provides shelter for themselves to rest during the hot hours of the day and prevent water from evaporating and by storing water in the canals during warm seasons and drought spells.

The easiest and least troublesome way to see this shy reptile is the “Crocodile Pond”, which is actually a protected pool that hosts adult mugger crocodiles, where you can safely see the rare species up close.

Another place to find the species is its main habitat the Bahu Kalat protected area (with an area of 465,181 hectares, Bahu Kalat has been designated a protected area under the management of the Department of Environment, and in 1982, it was renamed Gando protected area).

On the Iranian Makran coast near Chabahar lives a population of around 200 mugger crocodiles. Due to human activity and a long drought in the late 1990s and early 2000s, it had been pushed to the brink of extinction. Following several tropical cyclones in 2007 and 2010, much of the habitat of the mugger crocodiles has been restored as formerly dry lakes and hamouns were flooded again.

Although the crocodile is a very intelligent and shy species, it is, therefore, difficult to observe directly, so given the high probability of not being observed by census teams, the estimated number of this species in the region is twice the number observed about 400 crocodiles.

The mating season of the Gando is in mid-March and lays about 30 eggs in May, which hatch in June and July.

These animals are sold to wildlife centers in order to preserve their species.

Also, some breeding and research centers in the field of wildlife need baby crocodiles.

Crocodiles are used for their skin, flesh, and blood, as their skin is highly fire-resistant, their flesh is used in traditional medicine, and their blood has about 10 times more antibiotic properties than medicine and has been successful in eradicating some viruses.

Threats to the species

Heavy floods in their habitat and the hunting of baby crocodiles by the adults are natural factors threatening the Iranian broad-snouted crocodile.

Sistan-Baluchestan province has experienced drought spells on average every 30 years, and this raises concern over the extinction of the precious species.

The effects of drought have drastically reduced the habitat of Muggers, so human conflicts raised. Muggers have also moved into artificial canals and rivers where it is more in danger from humans. Some of them strayed into artificial ponds where humans are present. One of the biggest problems for Muggers is the fact that more and more people want to live in the same places that they do.

Habitat destruction for agricultural purposes, improper water withdrawal by pumping and digging canals, various chemical contaminants such as pesticides, herbicides, fungicides, motor oils, and detergents can be catastrophic and directly or indirectly endanger their offspring.

Some crocodiles are also threatened on the routes due to car accidents.

The mugger crocodile might potentially dangerous to humans. Fatal attacks have been reported, though less frequently than by saltwater and Nile crocodiles.

Human victims are dragged into the water and drowned but are rarely consumed. Each year, several attacks of muggers on humans are reported in southern Iran.

As water scarcity is hitting the Sistan-Baluchestan province, children or adult locals get near the muggers’ habitat to get water and the animal defends his habitat by attacking the locals.

Attacks out of the water are unlikely- the element of surprise is lost because most of them cannot move fast on the land. But some meetings are harmful especially for children.

Since large muggers occasionally take livestock, this leads to conflict with local people living close to the mugger habitat.