Chabahar city with an area of nearly 17,150 square kilometers and a population of over 200 thousand people is situated in the province of Sistan and Balochistan in the most southern point of the east on the shore of Oman Sea, in the nearest distance with the open waters such as Indian Ocean, it is the only oceanic port of Iran. The position of the bay in this port and also existence of deep waters and natural cuts has created a special space for jetties with great depth and desirable harbor for berthing of large ships so that this port has the capability of transformation into a mega port. In other words Chabahar is the Iran’s eastern transit gate and it is seen as a strategic region for the development of transit industry. This distinctive feature is not observed in other southern coastal areas of Iran and even in the Persian Gulf states.

Considering all abovementioned facts, it is therefore necessary to look at the special geographic position of southeastern part of Iran, specially the Chabahr port from the view point of national interests in order to boost and reinforce economic communication with neighboring and Central Asia countries in the realm of trade exchanges using natural capacities and the potential provided by the Chabahar Free Trade Zone organization. Doing so, we will endeavor to fulfill remarkable goals including removal of deprivation, economic development, presence in global markets, creation of reproductive jobs, exportation of industrial and provision of general services (as mentioned in article one of “Administration of Free Trade-Industrial Zones of the Islamic Republic of Iran)". 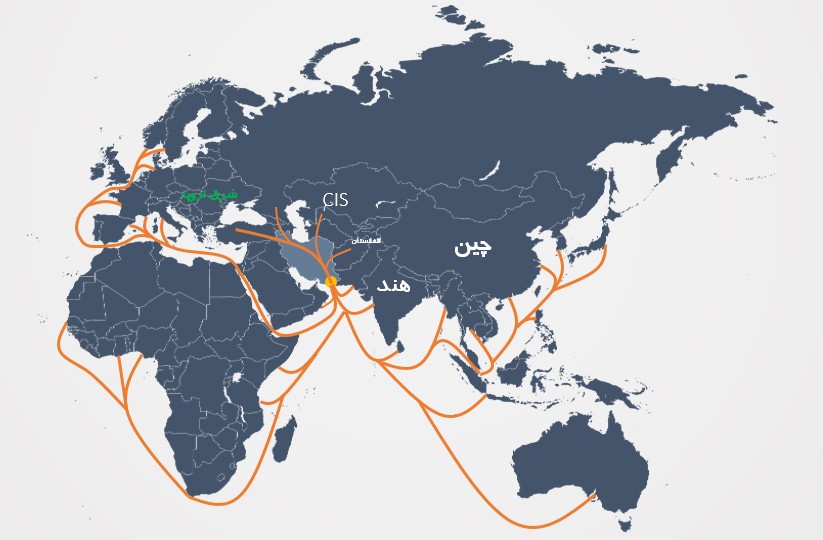 Chabahar’s position along international transit of goods (or shipments)

About 50 percent of global transportation of goods (or shipments) is carried out in the Far East, as declared by the U.N. transportation surveyors. Two transportation corridors pass Iran among three global ones which Chbabahr is the southernmost part of east-west corridor (predicted by the said surveyors).
This journey of goods (or shipments) is started from the beginning of Silk Road in China; it nourishes its economic core, i.e. Canton and joins the south eastern Asian countries. Then arrives India while covering the transportation in its main cities including Calcutta, Nakpoor, Jaipoor, Hasir Abad, Karachi, Ben Ghasem and finally arrives the Chabahar.
From the viewpoints of experts, Chabahar port is the intersection of south- north and east-west corridors around the world. This characteristic is an inevitably considerable privilege of the eastern part of the state.