Chabahar Bay is the largest and most beautiful natural bay in the South East which is the result of the fusion of sea, land, and sun and has naturally been located over thousands of years on the Makran coast of Sistan and Baluchistan Province in the corner of the Oman Sea. Originally Chabahar area has numerous natural bays that are centered on Chabahar Bay, this natural bay that has a very tangible landscape is host to dozens of fishing ferries and boats. Chabahar Free Zone is located in the beautiful East Bay. Numerous commercial and fishing wharves, Sarbaz, Bahoo Kalat, Kajoo, Bichand, Nikshahr, Bent, and Rapch Rivers . Underground water, Aquifers of Dashtiari, Nasferan, Kahir, Sadich, Date, Mango, Coconut, Papaya and banana Gardens, Volcano Wave Phenomenon, Harra jungles, Rock beach, Martian mountains, fig tree of temples, Short muzzle crocodile (Gando), Mud Volcano, Sandy beach, Sea turtle habitat, Migratory birds, beautiful dolphins, moss carpet, Lipar and Deshtar, and many other natural attractions are only a glimpse of the natural beauties as an important tourist destination.

Volcanic waves are one of the most attractive and unique phenomena in the Chabahar and the reason for this is the monsoon winds, especially in summer, and finally the production of waves that are thrown into the air up to a height of 20 meters in contact with the beach rocks. Many tourists experience fun moments with this phenomenon. Volcanic waves are one of the most beautiful phenomena that attract the eyes of every tourist. The length of the water particles thrown depends on the size of the wave and the season of the year, which can be seen in the peak of the beauty of this phenomenon in summer. This phenomenon is mainly observed in a place called Darya Bozorg located in the coastal center of Chabahar where a good place to watch the sunset on the sea is also. From the holes inside the rocks, water sometimes jumps out with intensity and in the form of a fountain. The extreme beauty and anger of nature can be seen in this phenomenon. 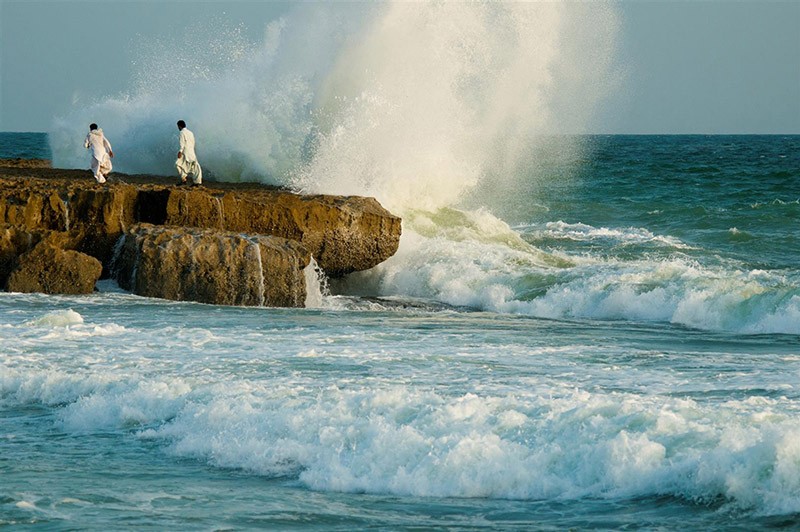 Mangroves are salt-tolerant trees that have a complex root system to cope with saltwater immersion and wave action. These trees can grow as high as three to eight meters and have external roots. You can enjoy leisure activities like boat rides and see beautiful dolphins. Mangrove (Hara) forests are located alongside the Gwatre Gulf, which has made a suitable residence for valuable species of seabirds such as flamingo, pelican, eagle, heron, etc. These forests appear with flow and ebb. 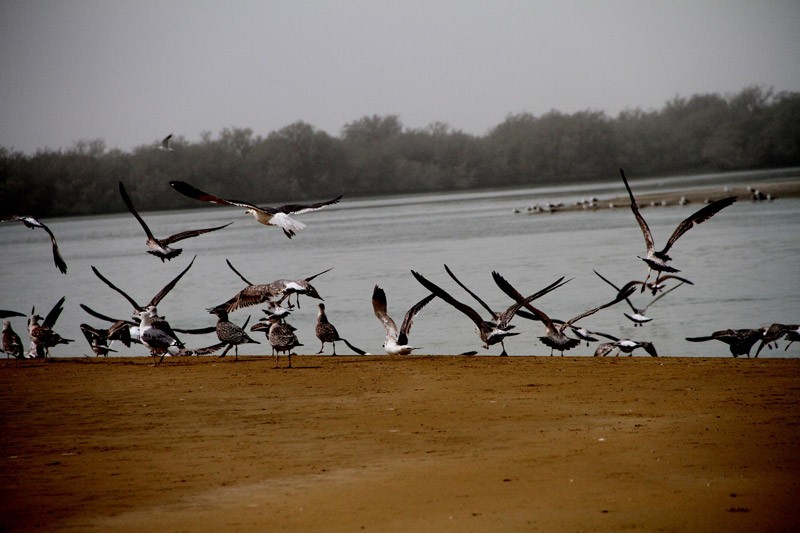 Waves striking rocks and wearing out the sedimentary layers of the shores of the Oman Sea, especially the southern parts of Chabahar have created an attractive and unique landscape that is regarded as one of the most beautiful shores of the south of Iran. These natural phenomena resemble a natural aquarium with various species of fish to live in. At low tide, seashells, smooth sea stones, and small fish can be seen in the gaps in the cliffs. On top of these rocks, you have a beautiful view of the sea under your feet. This extraordinary landscape extends from Chabahar as far as Gwatre. 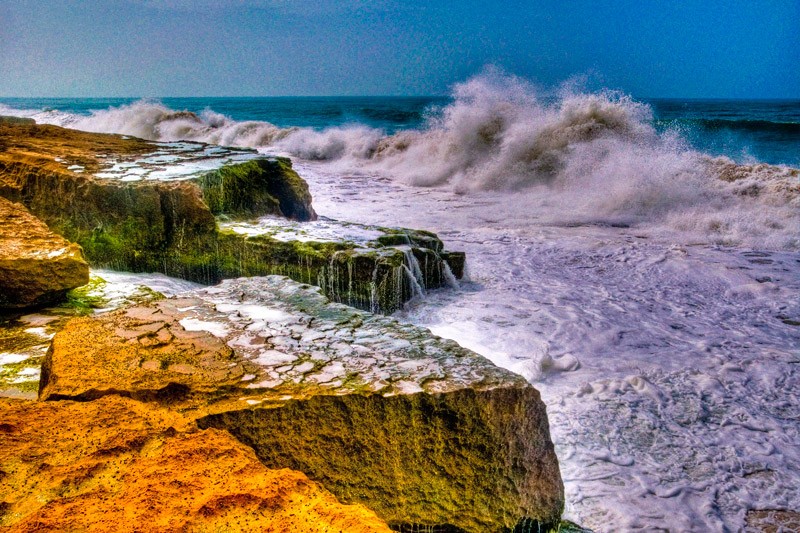 Did you know you can see the face of Mars in Iran? After 40 to 50 km on a very beautiful coastal road after Chabahar, you will reach the Martian mountains, which is one of the most beautiful sights of Chabahar. These mountains continue to the neighborhood of Gwatre Bay. Water and wind erosion has been one of the most important reasons for the formation of these mountains. Interestingly, a variety of fish and aquatic fossils have been found in these mountains, proving that the Martian mountains were submerged in the past. since the mountains are near the sea, the mark of the tide on them cannot be ignored. The phenomenon, however, prevents the growth of plants in the region. 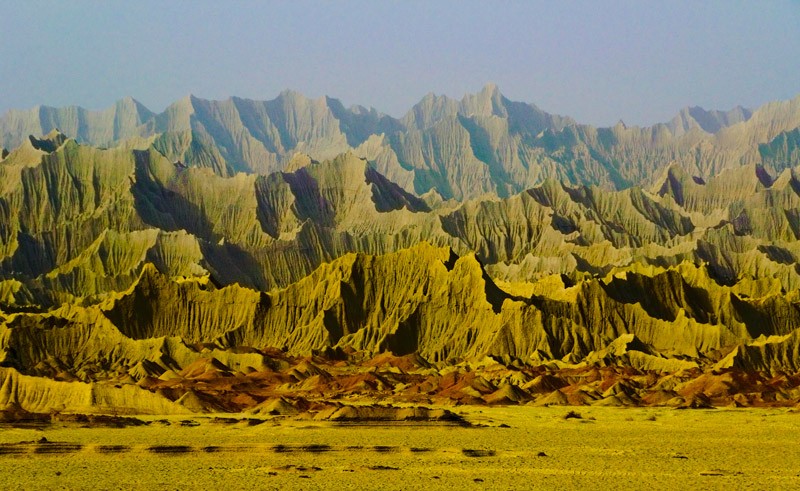 Known locally as "Karag", is found along the shores of the Persian Gulf and the Sea of ​​Oman. These trees are over a hundred years old and they are often located near the shrine or maybe similar (inside the temples in India). The bark of the tree is smooth and gray, the egg-shaped leaves are simple and large, and its red and orange sweet fruits are small in the size of Hazelnut form which is consumed by its inhabitants. It has an unusual life cycle. Branches of this strange tree bounce off the ground and sink back into the ground Instead of looking up at the sky. After the branches sink into the ground, another stem emerges from them, which has a unique and fragmented trunk. The fig tree has been observed in other parts of Chabahar, including the village of "Tis" and the village of "Kahir" in Konarak. 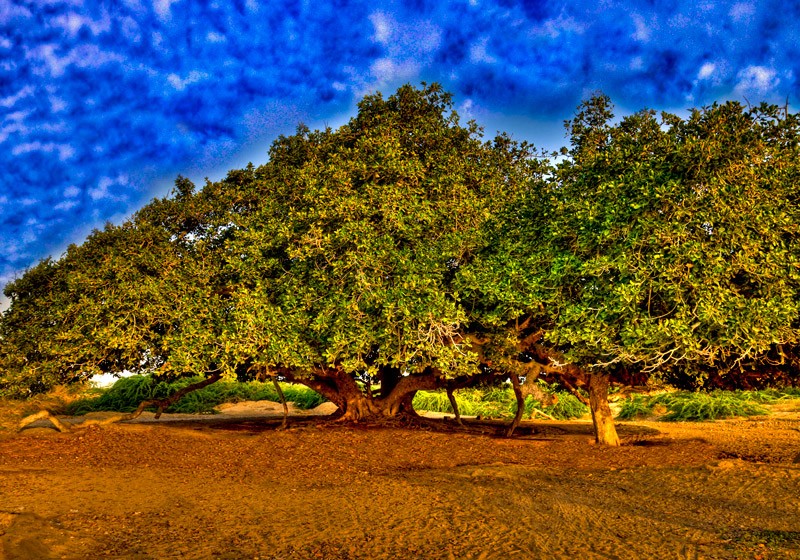 Short muzzle crocodile, which is called Gando in the Baluchi language. Located in the southeastern part of Balochistan, on the banks of the Sarbaz River and ponds in the Bahuklat Protected Areas. This crocodile is a branch of a large population whose geographical distribution extends from West Pakistan to India, Bangladesh, and Assam then reaches Myanmar. This crocodile has a broad snout that has 19 teeth on the sides of the upper jaw and 15 teeth on the sides of the lower jaw, and two pairs of large horny plates can be seen on the back of the head and in the neck area. Their legs are short, with five toes leading to long nails on the front legs and four toes leading to shorter nails on the hind legs. The general color of the body is olive to brown and their yellowish-white abdomen is scaleless. This crocodile is very shy and hides in the water with a disturbing presence, but it must return to the surface of the water immediately to breathe.

Gando, depending on the amount of rain, is more active in autumn, winter, and early spring, and these activities will continue until May. Gando is immersed in the surface of ponds or resting in the sun on the marshy shores. In summer when the temperature rises to 49 degrees in some areas. They sink in the mud of the swamp or live in groups in the depth of the water. During the periods when the weather is not very hot and humid, Gando feeds on animals such as fish, frogs, small mammals, ground squirrels, water beetles, and more. The best food for Gando is herding dogs, but sometimes it also attacks sheep and goats. Gando, despite his large size, does not need much food. An adult Gando consumes only half a kilo of meat per day. According to an old Baluchi belief, Gando is considered auspicious and it is believed that wherever Gando is, abundant water can be found. 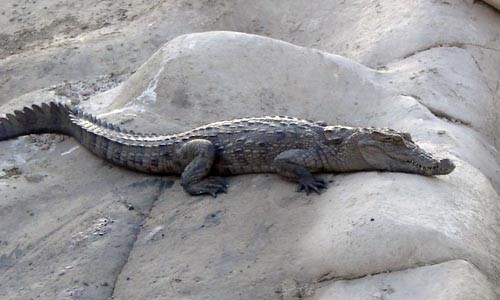 The 100-meter Gel Afshan (Mud Volcano) located in the North West of Chabahar is one of the fascinating and extraordinary phenomena of Chabahar. At the highest point of this mud volcano is a mud pot that erupts and extrudes mud every minute which flows the mud from inside the earth and explodes it to the surface of the earth and eventually takes the shape of a hill. It also releases gas from underground to the atmosphere. No plants grow in the surrounding area. The mud extrusions of this volcano are cold. It is believed that this mud volcano has been developed because of the activity of this mud pot over the years. You can see this attraction in all seasons, but the best and active time is in summer, which is a season of rainfalls in southeastern Iran. You may be thrilled to know that the muds of this mountain can be used to treat skin diseases, back pain, and joint pain. 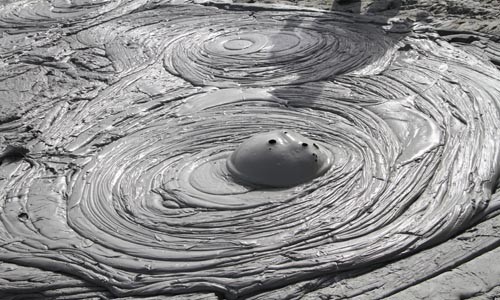 Moss carpets are another natural and touristic phenomenon in the region that can be seen in abundance along the coast. These phenomena are affected by chemical and physical erosion that has occurred over thousands of years. Moss carpets are mudstones that contain algae and fungi. This phenomenon causes the destruction and breakdown of rocks due to weathering. Moss carpets can be seen early in the morning and at low tide on rocky shores. The pleasant living conditions of mosses and algae in saltwater and the abundance of nutrients have created this beautiful and unique phenomenon. Seeing tens of square meters of algae and walking barefoot on it is a different experience. The combination of the bright green color with the blue of the sea under the sunshine is unquestionably one of the most beautiful paintings in the universe, and the breeze from the sea doubles the passion of seeing it. 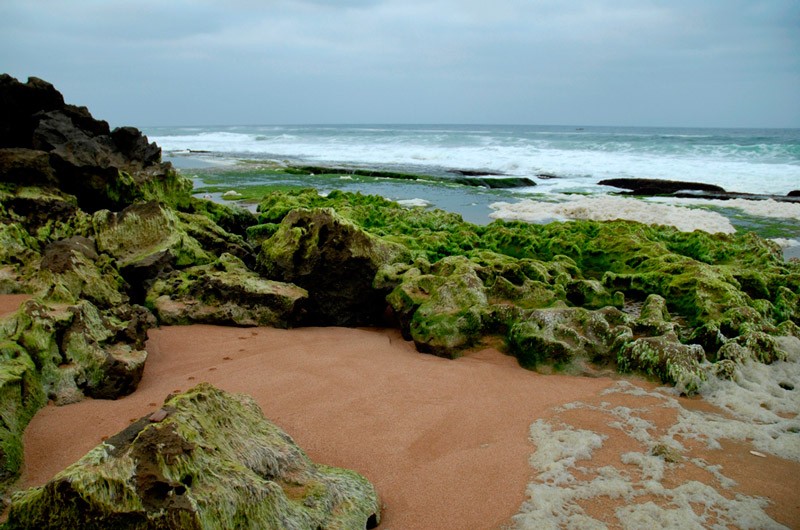 This lagoon is close to Ramin village with a distance of 15 kilometers from the east of Chabahar. Different kinds of shrubs and trees like Acacia and Nettle-rash can be observed which makes a very amazing and wonderful perspective for the tourists. This lagoon is very popular because of its pink color. The water of this lagoon is milk-strawberry in color due to the presence of plant bacteria and plankton, and therefore, they seem suitable for drinking, but in fact, they are among the saltiest reservoirs in the world. Lipar lagoon is a great bird-watching destination and is home to the coot, flamingo, grebe, great egret, grey heron, purple swamphen, sandgrouse, see-see partridge, grey francolin, tawny eagle, Eurasian teal, and kestrel.